hijinks through a nifty set of specs...

so. before we even left NY, i started searching for the perfect couch for our space. i went through a few iterations of my vision for the living room…the first couch i pinned was this one:

i liked the idea of having a single bottom cushion; far superior for sleeping purposes…we have a guest room with a super comfy futon, but…1) i love me a good couch nap, and 2) if we have more guests than a full-sized futon can accommodate, a sleepable couch is a necessity.

i liked that style, but not the price or the color. so on i went searching for tufted sofas.

i had two of these beauties, and i wanted to find something that would fit with them, design-wise.

then i found this sofa on overstock…

of course…it was sold out. so, i decided to ask them the manufacturer. SURELY someone else would have it available. but wouldn’t you know…they don’t disclose such information. incensed and armed with determination fueled by my righteous indignation, i google image searched and found it. for less money. BOOYAH, OVERSTOCK.

the more i though about it, though, the less ok i felt about “bonded leather”. the red chairs were a favorite scratching post of The Malaysian Prime Minister, and i didn’t want a new sofa to meet the same fate. but i’d fallen in love with the tufting and the angled cushions.

angled cushions? check. tufted? check. and it was in gray, which was the color i’d ultimately decided i wanted. went ahead and pulled the trigger and ordered.

a week in portland with zero furniture…expecting a call any day about delivery…i called the online shop i ordered from. (which, i’d like to note, i’d ordered from before and been totally satisfied.) they had NO idea where it was or when it would arrive.

our righteous indignation was renewed. we canceled the order, more than half on principle.

at that point, i decided we should visit area furniture stores and pick something that would be delivered NOW.

i was forced to relinquish some of my ideal qualifications…we went to the ashley furniture home store outlet which was having a moving sale…found a couch i could be quite happy with. bought it. was informed that it would take a couple weeks to get it from the warehouse IN CALIFORNIA.

they told me it would be a couple weeks…after two weeks i called…, “well, it hasn’t QUITE left the warehouse yet.” finally, a month to the day from when i purchased it, they attempted delivery. but wait…you know what’s coming, right?

this sofa was a monster (96″) and it simply wouldn’t fit in the front door. in fact, we’d be lucky to get something any longer than 80″ or so in the door.

at this point every last shred of patience for living without seating is gone…and it would seem we needed something we could assemble in place. IKEA…here we come. again.

we wound up with the karlstad in isunda gray. 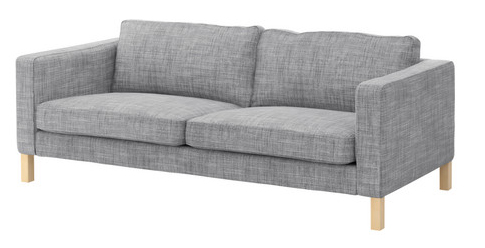 my trusty friend, google, provided inspiration to leave us with a sofa surprisingly like what i was drawn to in the first place.

ourmidcentury.com found a unicorn (aka mythical creature) of an upholsterer and were able to have their cushions tufted for them. i called and called and found no one for anywhere near that price range, so an upcoming post will detail the adventures of DIYing the buttons and tufts.

i’m generally happy with where we ended up…but could have done without the frustrations at every turn!